Menu
Log in
Register
Install the app
You are using an out of date browser. It may not display this or other websites correctly.
You should upgrade or use an alternative browser.

Makes you want to take a really deep breath Awesome that you have it back running with more power than when new.

Hey Kirk, I haven't checked in for a while. Hope you're doing well. I'm guessing you're getting busy with spring projects and taking some time away from the sleds. I have quite a list of things to do myself so the project sleds will have to take a back seat until I get a few things checked off the list.
K

Hi gang,
I finally got the trailer out of storage, hopefully I will have something to add in the near future.
K

Well gang, I was finally able to transfer my 500 from the sled trailer to my car trailer.... I took a break before dragging it up the ramp and snapped a picture... one seasons toys packed away, another one getting ready.

Well a little late, but I finally got a chance to work on the seat for the Centurion. When I took it apart, the inner trunk was all busted apart. Thankfully Skiroule told me a long time ago, that the foam and trunk is valuable.... so in my hoarding I mean searches I have accumulated two or three extras. I disassembled one and started putting the pieces on a new base I made last year...... I guess I was worried that it might shrink

. Anyways here's a little progress. Hopefully I can get the cover installed soon.

Got the initial stretch on for now, need to get it tightened up more, but it's looking better. Sure works better with more hands helping.......

Well today I painted the tank mount, and kinda finished the seat. The cover might stretch out a little more, so I left some extra in case I have to pull some staples and tighten it up. I only use stainless steel, so they won't rust. I have a few more pictures, but it's not on the sled until I can firmly attach the gas tank.

I don't want to sound critical with this, but, I have to ask, why do the corners of the storage compartment frame stick out as far as they do? Looks like a potential problem??? Perhaps round the corners of the frame, or build up the seat foam at the rear??? Just curious, not trying to offend.
K

mezz said:
I don't want to sound critical with this, but, I have to ask, why do the corners of the storage compartment frame stick out as far as they do? Looks like a potential problem??? Perhaps round the corners of the frame, or build up the seat foam at the rear??? Just curious, not trying to offend.
Click to expand...

No offense Mezz..
I actually took it apart Twice and tried to get it better, but seems the foam is just too short. I thought about adding a second board on top, or I could shorten the frame, but that will make the door taller. I don't want to shorten the door too.
This is the nicest foam cushion I have, and they all hardly have any foam in the top corners, right where the inner box is pushing up.... so I am at a crossroads......The cover has a small blem in it already so if it changes I will have to replace it.
You know, I may just add some foam and try it , won't be installed for a while yet.
Last edited: Dec 16, 2022

For what its worth, perhaps try to add some firm foam to the cushion area near the storage / tool box. The foam can be glued on to the existing foam and shaped to blend with the contour of the seat, just my .02. Maybe Kelly has some better ideas. I'm sure you'll figure out what will work best for you.
R

I have numerous TX's, all from 72-79 and the ones with the trunks like that are all pretty much the same as Kirk600's. Came that way originally.

Rupp Collector said:
I have numerous TX's, all from 72-79 and the ones with the trunks like that are all pretty much the same as Kirk600's. Came that way originally.
Click to expand...

I didn't realize that they came that way. It looks like it could be a an easy piece to break if one were to get bounced to the rear of the seat or catch the corner of it by someone getting off of it. I was just observing & thought it looked odd. It's all good....
K

This cover is the same as the TXL I just did last year, but that TXL looks much better than this one. I took another seat apart to compare the foam around the inner trunk, and it might be marginally better in that one spot.
The problem is the foam usually gets hard/brittle down low around the base and up by the tank where your always compressing it and that opens it up for water intrusion. Plus gas spills take a toll on the foam also. So it can be a compromise based on what you have, or can easily repair.
The inner trunk can only be moved in so far until the outer framework no longer sits flush.
K

Way to go Mezz - you've forced me to go out and look at my 79 TX's tonight to see what they looked like. Like Kirk's TXL, the corners aren't as noticeable on the TX's. They still look a little odd though if you really take a close look at them. I believe Polaris used that basic storage trunk for many years, models, and seat styles. The 75 Colt I picked up uses the same trunk as my TX's. Maybe they tried to save some bucks along the way and it just fits some seat configurations better than others.

And yes, they do break off, as do the frame corners.
K 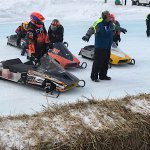 Well I have a few pictures, and a story to tell about Eagle River Vintage Weekend. I went back this year, mostly as a pit crew for my friend and his son.
Last year's event was the first time his kid got to ride the new super mod 440, and he went into the hay bales on his first lap. They had the rest of last winter to sort it out and were getting some respectable lap times at some tracks here in Michigan. This year, the Derby Complex cancelled all practice laps, you were told be ready to race. Well it was warm, they had trouble with half of the drivers transponders not working.... so it took over 4 hours for 56 drivers to each get two laps in qualifying. With the warm ice, the #61 super mod was really tight, and kept lifting the inside ski. He initially was qualified 34th or somewhere close to that spot. In the drivers meeting, it was announced that no buybacks if you haven't already done it. Well, almost 30 had, so as the day progresses, temperatures are dropping and the track gets looser as the ice gets harder. After the dust settles he missed the show by 4 positions. His Last chance qualifier he's running in 4th of 8 drivers and spins in corner 4 on the final lap. Top 5 transfer..... that's how the weekend goes.
The F500 sled was running good, but another driver spun out in front of him, and he tagged her in the rear of the tunnel trying to get by, which collapsed the expansion pipe...... after that it wouldn't rev over 7000rpm...
The dad's Blizzard 7500 had issues in both of his races, 1st lap was good as far as RPM's go then it was going flat. We tried clutching and jetting, but ultimately it was ignition problem. It has been switched over to Polaris ignition and dynoed right back to where it was.
I heard over 400 sleds were in attendance for vintage WC, and over 700 registered for all the various classes.
The final Super Mod 440 WC on Sunday was a crash fest, before 1 lap had been completed they were down from 12 sleds to 7. At lap 6 they were down to 4. Sabrina Blanchette won it, becoming the first female to do so. 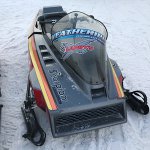 Here's the last few.... #28 is from Minnesota Matt Goede, last year's vintage WC winner. Unfortunately for him, he was taken out by another racer who broke his outside ski in turn 4, which caused his sled to drift up the track and hit 28 sending him into the bales. A broken spark plug & wire ended his attempt to repeat..... one of the many first lap sacrifices....

Pretty intense stuff! This sounds like an awesome event and it must be a blast to be in on the action. Those sleds seem to be tuned to the max and you have to have your stuff together to be competitive.

The Scorpion mod is a real eye-catcher. Bet you don't see a lot of those on the circuit.
K

skiroule said:
Pretty intense stuff! This sounds like an awesome event and it must be a blast to be in on the action. Those sleds seem to be tuned to the max and you have to have your stuff together to be competitive.

The Scorpion mod is a real eye-catcher. Bet you don't see a lot of those on the circuit.
Click to expand...

Yes and no Kelly! It's an awesome event, but when you're wrenching you're not watching so I didn't get too many pictures this year. More fun when you don't have issues either!
Last year I had another guy helping, which helps a lot.
That scorpion was one cool machine, and it was ifs sled